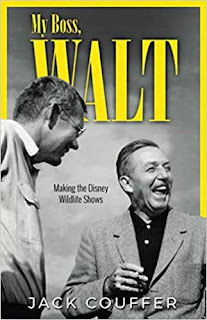 This just in from Theme Park Press. I can't wait to read this new book!

[As a motion-picture writer, director, producer, and cinematographer, Jack Couffer shot wildlife films for Walt Disney, journeying to some of the most remote and exotic places on earth. Here, in his final book, he shares powerful, poignant stories about his favorite subject: animals.

Couffer made Disney feature and television films for 30 years. The Living Desert, Nikki, Wild Dog of the North, Never Cry Wolf, and a dozen other titles bear his identity. His stories filmed in far-away places like Africa, the Galápagos Islands, Antarctica, and the wilds of the American West give us a glimpse into the pains and joys of working with friends and adversaries inside the Disney studio.

Replete with photos, My Boss, Walt is Jack Couffer's swan-song chronicle of his long life of exploration, adventure, and joy.]