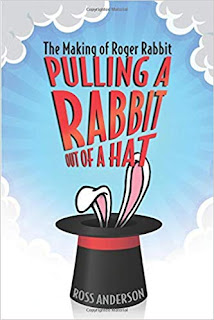 I have just received my own copy of Ross Anderson's long-awaited book about the making of Who Framed Roger Rabbit.

If you look at the back cover, you will see that I wrote about it: "Pulling a Rabbit Out of a Hat makes a significant contribution to the fields of animation history, Disney history, and film history. The research that Anderson conducts is in-depth, original, and all-encompassing. His whole book covers ground that has mostly never been covered before."

I strongly believe this. The amount of original research that Ross conducted to write this book is staggering. However, be warned: this is not a book that is easy to read. The amount of information it contains is much too rich for it to be the case. It is a fantastic reference book and you will learn a lot by reading it. However, Ross tried to include so much in it that it also makes it a difficult read. That is the main drawback.

I had seen an early manuscript and what I discovered with great pleasure in the finished book is a large amount of photos that I had never seen before and which enrich it even more.

This is a must-have and not just if you enjoy Roger Rabbit. There is so much about the "Disney Studio transition" period of the 1970s and early 1980s that you are bound to find the content of this book fascinating in one way or another.