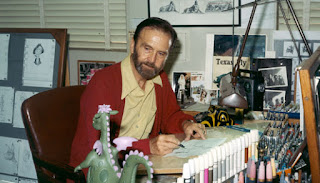 Since 50 Years in the Mouse House and Walt's People - Volume 16 are now released and since the official release date of They Drew As They Pleased - The Hidden Art of Disney's Golden Age is just a few weeks away, I thought I should find a few minutes to give you a quick update on the other projects I am currently working on.

1. They Drew As They Pleased - The Hidden Art of Disney's "Musical Years"

I am working with Chronicle Books on the final edits and will soon start writing the captions. Scheduled release: September 2016.

I will send the manuscript this week to the contributors to get their comments and corrections. Expected release date: December 2015.

I have started editing some chapters for this exciting volume.

I am helping Ross Care edit his extensive correspondence with director Wilfred Jackson which will be released in book form next year, complete with Wilfred Jackson's newly discovered diary and some of the letters Wilfred wrote to his wife in 1945 while on the set of Song of the South in Texas.

I am also helping historian Paul F. Anderson and Bob McLain from Theme Park Press transcribe and edit all of Paul F. Anderson's oral history with Disney Legend Ken Anderson for a release in book form later this year.

6.  Animator on Horseback by Mel Shaw

So looking forward to these, especially The Jaxon and Anderson books. Does the "musical years" refer to the art from the war and post war features?

Really....great work and I´m looking forward to each one of them.