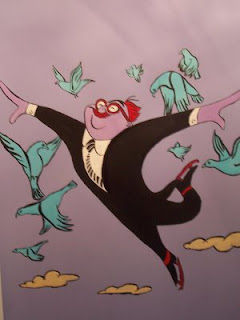 I am sad beyond words. Author, journalist, Disney historian and friend John Culhane passed away yesterday afternoon surrounded by his loved ones.

John's love of life and bubbling enthusiasm were infectious. He had met the most famous artists, scientists and politicians. He had traveled everywhere and had millions of stories to tell. And he had a heart if gold.

He was Mr. Snoops in The Rescuers and Flying John in Fantasia 2000.

He was the author of the books Walt Disney's Fantasia, Disney's Aladdin, the Making of an Animated Film, Fantasia 2000 - A Vision of Hope, and a few others.

But for my wife Rita and I, he was most of all a friend, whom we met for the first time in Madrid a few years ago, then again in Dobbs Ferry, New York some years later. Rita was luckier than I was since she also had the opportunity to spend some time with John and his wife Hind in Rio de Janeiro, a city that John had always dreamed of visiting ever since his earlier encounter with Jose Carioca.

Our thoughts are with John's wife Hind and with their sons Michael and TH.

John: we are all eagerly awaiting your interview with Walt. If St. Peter allows it: please do not forget to record it this time around.

Anonymous said...
This comment has been removed by the author.
1:54 PM

So very sad. Our visits with John were always a joy. And, the wonderful Disney stories he would tell. We could listen to him talk for hours.