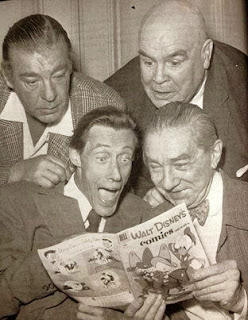 [In the photo are horror film actors Lon Chaney Jr., Tor, Bela Lugosi and John Carradine enjoying a Disney comic book.Some further research shows that the photo was probably a publicity shot from the movie THE BLACK SLEEP (1956). The only other major actor in that film missing was Basil Rathbone.]
Posted by Didier Ghez at 7:43 AM

The mentioned "Tor" is Tor Johnson. The comic book they are holding, is "Walt Disney Comics and Stories" No. 190, July 1956.