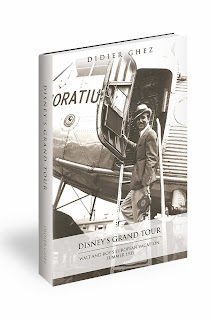 To say that I am extremely busy these days, would be the understatement of the century. We have just moved, over the weekend, to a new (and hopefully permanent) house in Coral Gables, Florida. Remember all these boxes of books from a year ago? This is happening again.

I am in the process of reviewing the galleys of Disney's Grand Tour, which should be released early December at the latest. I will soon be reviewing (along with Greg Ehrbar) the final galleys of Inside the Whimsy Works, which will be released in February 2014. And I have just sent the manuscript of Walt's People - Volume 14 to the contributors for review, with the goal of releasing this new installment in March 2014.

This is hopefully only the beggining. I am working (along with some of you) on helping edit three "lost" autobiographies of key Disney artists from the Golden Age and I have a few more exciting projects in various stages of development. This has been a very productive year indeed.

Looking forward to all these projects you have in the works but especially "Disney's Grand Tour."