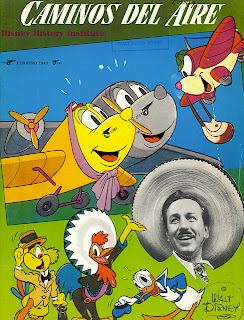 - COVERING DISNEY~Walt South of the Border by Paul F. Anderson

Here is the translation of the article:

[The Clippers of Pan American Airways which unite the continent were invaluable vehicles for Walt Disney, who, with a group of artists and photographers, made a trip to the countries and Center America and South America to get data, impressions and panoramic views for the color pictures that he is planning and that he is developing with the CIAA.

This long trip, which would have usually taken months to achieve using other ways of transport, was done in just a few days thanks to the Pan American Clippers.

In the Andes, in the pampas of Argentina, in the forests of Brazil and in the beautiful lakes of Guatemala, the creator of Mickey, Donald, Pluto, Jose Carioca, Dumbo, and many other characters, became the guest of honor of his fans.

Walt Disney crowned his trip to Latin America with a visit to Mexico.

With a group of landscape painters, artists, caricaturists, composers, photographers, and script writers, Walt Disney traveled from Los Angeles to Mexico City aboard the Clippers of the Compañía Mexicana de Aviación.

Along with Walt Disney and his wife, who took the CMA road, which reaches the principal cities of the Republic along the Pacific Coast, arrived the producer Norman Ferguson, the Foreign Department Chief of the Studio, Jack Cutting, the composer Charles Wolcott, the watercolorist Mary Blair, the animator Fed Moore, the landscape painter Ken Anderson, the caricaturist Ernesto Terrazas, the storyman Homer Brightman, and the technical consultant Edmundo Santos.

When they arrived in the capital, the party was greeted by the Head of the Tourism Department, Mr. Alejandro Buelna, a mariachi who played regional music in the airport, and many people of all sexes and ages who wanted to welcome the travelers.

Without losing time, Walt Disney and his artists, who stayed at the hotel Reforma where they granted interviews to the local press, started working earnestly and with heart on the sketches on the new picture with a Mexican theme which will be called Piñata.

[Caption: Despite the rain, a cordial welcome for the arrival of Walt Disney on the California Clipper of the Compañía Mexicana de Aviación.]

One group visited Cholula and Puebla, another Cuernavaca and Taxco, and another Morelia and Patzcuaro. The watercolorist Mary Blair and storyman Homer Brightman made a special trip on the CMA route to Ixtepec, Oaxaca, to discover Jucitán and Tehuantepec, and were helped during their trip by the PR Department of the Compañía Mexicana de Aviación.

During his stay in the Mexican capital, which lasted 11 days, Walt Disney was treated as a guest of honor and received many awards: he was received by the president, General Manuel Avila Camacho, by the Secretary of Foreign Affairs, Ezequiel Padilla, by the United States Ambassador, Mr. George Messersmith, and was guest of honor of a bullfight organized by the Compañía Mexicana de Aviación, which left him “amazed,” according to his own words.

Before leaving the country and starting to work on his new Mexican-theme movie, Disney summarized his impressions of Mexico:

“I was delighted by Mexico, its people and its natural beauties. I aim to come back to spend a long vacation here with my wife. Of course I will use the Clippers of the CMA: I was extremely happy with the service and the security of the trip, and with the cares that I enjoyed.”

Always great to see a magazine article one hasn't come across before. Thanks to Paul for posting it and to Didier for translating it!