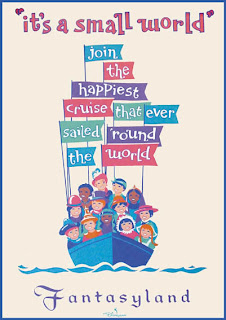 Why did Bank of America become the sponsor of the "it's a small world" attraction when it moved to Disneyland after its successful run at the New York World's Fair? Disney historian Jim Korkis recently heard from the daughter of Lawrence Pritchard who was the Corporate Secretary and head of advertising for Bank of America at the time, and she shared with him that "my father told us that not only did BofA have a longstanding relationship as a sponsor of Disneyland but that the bank took an interest in sponsoring this particular ride because the theme suited the bank's foray into "World Banking" a term coined by BofA when regulations changed to allow the bank to operate outside of the USA. (At the time US banks were still restricted to operating within one state only.)"
Posted by Didier Ghez at 2:11 AM

Labels: it's a small world

Bank of America's relationship with Disney preceded Disneyland by decades.

The most famous example is the oft-told tale of Snow White. Walt recalled "Roy told me that we would have to borrow another quarter of a million dollars to finish the movie. 'You've got to show the bankers what's been completed on Snow White as collateral.'...I had to sit alone with Joe Rosenberg of the Bank of America and try to sell him a quarter of a million dollars worth of faith. He showed not the slightest reaction to what he viewed. After the lights came on he walked out of the projection room, remarked that it was a nice day—and yawned! He was still deadpan as I conducted him to his car. Then he turned to me and said, 'Walt, that picture will make a pot full of money.'"

Less well-known is a story Roy told, and later related to Card Walker: "Roy met with A. P. Gianinni the original founder of the Bank of America. And they were up in San Francisco in front of all the board and I think at then we only needed about $70,000 to finish the first color cartoon. Then Gianinni looked at all his board members, they were going to turn it down and he said, 'Hey, how many of you guys have ever seen a Disney cartoon? A Mickey Mouse or a Donald Duck?' No one ever had. 'What you don’t know, these two young guys are going to go places and they’re going to get the money. It’s approved right now.'”