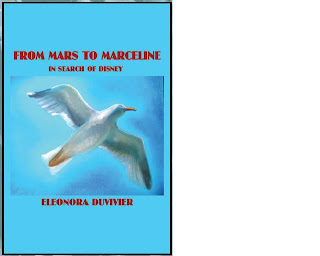 This press release just in from Eleanora Duvivier (a good friend of this blog):

“I hope we don’t lose sight of one thing- it was all started by a mouse.” - Walt Disney

MADISON, Wis. – In her highly insightful, inspirational new nonfiction, From Mars to Marceline: In Search of Disney (published by AuthorHouse), Eleonora Duvivier reveals what she believes to be the seed of our collective personal identity, founded upon the influence of Disney’s creativity and enterprise in regards to technological, psychological and mystical innovation.

Well-researched and grounded by personal experience and affection for her subject, From Mars to Marceline is at once a thesis, reflection and confession for Duvivier. From Mars to Marceline explores some of the fundamental ways in which Disney – as a man who gave birth to a revolutionary concept – affects our world today. Topics include aspects of technological life, which join fantasy and mechanical processes; the ever-growing dimension of fiction in everyday, trivial life and in our interactions; and the human mind’s capacity for mysticism, faith and metaphysical heroism. In her introduction, Duvivier, invites readers to stand in awe of what Disney created. She writes:

Disney animation prophetically inaugurated the relativity of the real in everyday life, that is, in immediate, sensory perception. Until then, the reaching of fantasy was mediated. Reading demanded a withdrawal into thought, and watching a play or a live action movie required an understanding of the story. The fantasy of their fictitious reality was all in the plot. It was intimated, not really seen. What was directly visible was either reality or a reproduction of it, like the shape and the movement of flesh and blood actors. With Disney animation, fantasy became immediate. … It was all fantasy and alive, more colored and second nature feeling than reality. In the directness of its convincing power, Disney animation became even more immediate than reality: body and soul inspiring.

Disney’s “illusion of life” was life regardless of, or above reality. Its believability, like that of all art, was its supremacy over the real world. The immediacy Disney gave fiction meant, in the end, the establishing of life over everything, like a consecration of it. That is why it felt like sheer reassurance. Today, with virtual reality, fantasy can be more sensory invasive than life itself.

Lastly, Duvivier argues that Disney’s efforts embody the American spirit, expressing the power of childhood, hope, love and the simultaneous control and liberation that is derived from artifice. From Mars to Marceline is a powerful tribute to the lasting affect of Disney’s legacy, revealing the ever-multiplying ways in which his ingenuity and authenticity continue to inspire us and compel us to realize his influence upon our collective personal identity.

Eleonora Duvivier was born in Rio de Janeiro, Brazil, and worked as an artist for many years before studying philosophy at Boston University, Kings College in London and Pontifical Catholic University in Rio de Janeiro. She currently lives in Madison, Wis., with her husband and children. She has previously published a book of short stories in Brazil.]