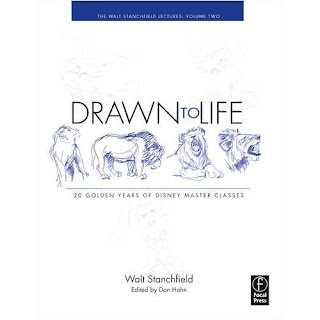 This just in from Don Hahn:
[Dear Didier,

I am so pleased to announce that for the first time ever, we have assembled all of Walt Stanchfield's amazing handout notes and lectures into a two volume collection titled, DRAWN TO LIFE - 20 GOLDEN YEARS OF DISNEY MASTER CLASSES. Walt was an animator, trainer, mentor and coach for decades at Disney and helped breathe life into the new golden age of animation with his teachings. He influenced such talented artists as Tim Burton, Brad Bird, John Musker, Glen Keane, Andreas Deja and John Lasseter.

To me, DRAWN TO LIFE is one the strongest primers on animation ever written. The material spares no detail on the craft of animation, but also digs deep into the artistic roots of animation. It is a publication that has been anticipated for many years by every artist and student that Walt ever came in contact with. It has been a labor of love for me and I am so proud that Walt's teachings will live on in these two volumes.

You can view a trailer at www.donhahn.com and very soon, this trailer will be available on focalpress.com and amazon.com. Both volumes will be available in bookstores on March 27, 2009.]
I will definitely pick up my own copies of those books when they are released. I also hope that Don will consider trying to publish in the future the conferences on animation given by many top Disney artists during Don Graham's class in the '30s. For an sample of those, check Hans Perk's recent post: Dick Huemer on Timing - Feb. 20th, 1936.
Posted by Didier Ghez at 12:39 AM

This is a must have for any would be animator/artist. We had folders of these notes in the Sydney studio. I highly recommend this to anybody interested in animation.