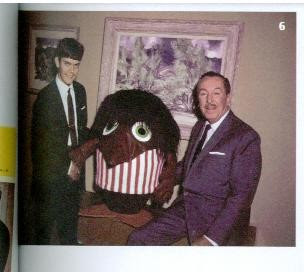 This is one of these rare days in my life when I would really love to be able to read Finnish. A few days ago I mentioned the autobiography (Disney, Aku... Mina) of legendary Finnish editor Markku Kivekas, one of the most serious actors in the world of Disney comics until his untimely death last year.

I have now received this book (edited by Pekka Tuliara) and from the illustrations alone and the fact that it is one long interview with Markku, I know that were I to be able to read it I would love it and would devour it from cover to cover.

But I can't and therefore have to focus purely on the illustrations, like those two rare photos of Markku with Walt (one of which serves as cover for the book) or the large selection of original drawings created for Markku by the best Disney comic artists.

Ah for the day when both "babelfish" and character recognition softwares will both work perfectly! Oh well, maybe my grandkids will be able to read that book someday thanks to new technologies. As for me, I am just grateful for the internet without which I would never have found this book nor been able to get it. 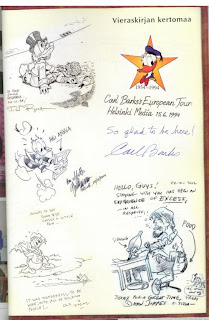 I just found a great drawing made by Markku Kivekäs. Well, in fact it's not as great as it could be but the text said that it's the only picture he (maybe) made in his long career.

Btw, check out of his autograph. It looks like a Walt Disneys signature to me: