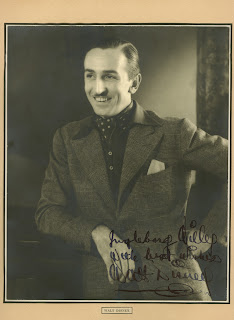 This just in from Bob Cowan:

[That was a great photo of Disney you posted (a few days ago).

Here's one of Walt from Ingeborg Willy's Scrapbook. This was on the second page of her scrapbook that had a starting date of November 1936. I would guess the photo was taken prior to that time.

I thought it was different because of Disney's "Hollywood" pose that was popular during the period.

Walt's face has a similar thin and "young" look -- similar to the photo of them as a couple...]