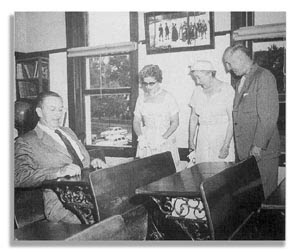 Disney Historian Jim Korkis did a presentation Saturday, February 21 for the Orlando local National Fantasy Fan Club entitled “Walt’s Return to Marceline 1956” about Walt Disney returning to Marceline, Missouri on July 4, 1956 for the dedication of the Walt Disney Municipal Park and Pool. Jim was pleasantly surprised to find two ladies who attended his presentation had actually been at that ceremony as children and that they were willing to share their memories.

However, Jim was even more surprised when he was showing home movies of that event and one of the women shouted out, “That’s my brothers!” Two young boys, both in Davy Crockett t-shirts, were patiently waiting for Walt. John and Jeff Neighbors now live in Ohio and their sister Jan, who didn’t make it into the official photos, lives in Florida. Apparently, her grandmother knew Walt quite well and Jan remembers Walt stopping by to visit her.

“We tend to forget how many people Walt knew and interacted with during the course of his short life,” said Jim. “For instance, my good friend and one of the most valuable resources for animation scholarship is animator Mark Kausler and he has a series of black and white photos of him as a child meeting Walt in Missouri. Hopefully, Jan will share more stories with us. Both women who attended the presentation remembered Walt as being genuinely friendly with the children.”