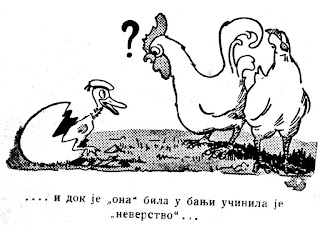 This just in from my friend Sasa from Serbia:
[I'm eclosing a cartoon that I have found in a magazine called SAD I NEKAD (Now and Before), from July 1936. The caption reads: "Did she betray me while she was in a health spa"? (at that time in Serbia, there was a popular belief that women who went to health spas would betray their husbands)]
Posted by Didier Ghez at 12:34 AM

So, Donald is half chicken?