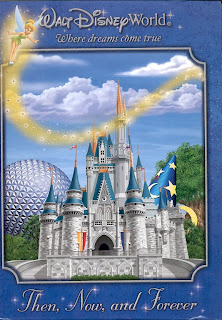 Walt Disney World: Then, Now, and Forever is the second book that I received from Disney Editions on Monday and - as you had guessed - this is the one I thoroughly disliked. To be precise and fair, if I had been an 8-year-old kid or a casual visitor of the park looking for a nice souvenir book, it would have done the trick. But as an adult Disney history enthusiast, this book is not worth spending a dime on. The text is extremely light and similar to what you would find in a park leaflet, and all of the photos are basically marketing "key art". There are no unusual shots, no historic photographs, no never-seen-before renderings, no surprises in any way, shape or form.

In summary: I will pass.

That being said we should not despair at all at this missed opportunity as Disney Editions should be releasing very soon an exciting book about Walt Disney World, namely The Art of Walt Disney World by Jeff Kurtti and Bruce Gordon. While I have not seen it yet, the interview I conducted with Jeff Kurtti about it is enough to make me want to fly to Florida and try and find it right away (although I would be jumping the gun as it should only be in stores in a few weeks).

Didier Ghez: How, why and when did you start working on that book?

Jeff Kurtti: Based on the success of "The Art of Disneyland" in 2005, it was not a long journey to contemplate an "Art of Walt Disney World." We tossed around suggestions and ideas, including a book on each gate and then a general one including hotel and other attractions, but came back to a single volume that is a companion to "The Art of Disneyland."We began work in early 2007, if my always-fallible memory serves, and delivered the final book in October of 2007.

DG: How did Bruce and yourself split responsabilities?

JK: Bruce was essentially designer, chief critic, and advisor. I selected the art, Bruce edited those selections based on his design, or on his persistently irascible personal taste. I wrote the text and captioning, and argued with Bruce about placement, information, and myriad detial.

DG: What were your criteria for the art you selected and included in the book?

JK: Aesthetic, personality, historic interest. There was no overriding criteria except those general guides. We also wanted to represent a wide range of art, artists, and projects, a much more difficult task that it might seem.

DG: Can we expect any surprises?

JK: A lovely variety of diverse art styles, some things I had never seen before, a lot of wonderful memories. I was especially surprised and impressed with the prolific work of Paul Hartley, and hope that this book brings his art and biography more into the mainstream of the Disney dialogue. Colin Campbell is also well-represented, as is soon-to-be-Disney Legend Dorothea Redmond.

DG: What are the renderings you are the proudest to have unearthed?

JK: I didn't really unearth anything, Disney's collections are meticulously curated, catalogued and preserved. It does a disservice to the Disney archival facilities to even imply that my work constitutes revelation. I am simply assembling and making public a contextualized collection of work. In fact, all the "heavy lifting" for this book in securing images was done by my Imagineering Art Library friends.Many pieces are early art that I remember from childhood—a beautiful painting of the Nautilus, and one of the Osceola steamboat. Bruce and I had selected Herb Ryman's iconic, but recently seldom-seen Cinderella Castle painting as the book's cover, let's see if it survived.In additon, some more recent work for Disney's Hollywood Studios and Animal Kingdom show the strong and continuing legacy of this beautiful and inspirational art, much of which is really never intended for the public.
Posted by Didier Ghez at 12:41 AM

"Art of WDW" is an essential.

I already have the "Legends of Imagineering" book, and Art of WDW is preordered. Thanks for the background from Jeff. It sounds like the book was delivered just weeks before Bruce suddenly passed away last November.

Hello, I like your blog very much. There is little I have to say about Disney World. I like it very much. The attractions are awesome. But the thing is that it is quite expensive. For me that is not a problem but what should do not well-off people who have several kids and can not afford a trip there. I saw the same complaints on this great site www.pissedconsumer.com.