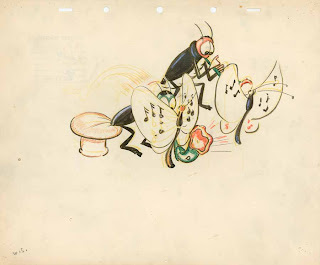 An other treasure from Bob Cowan's collection.

I'm not sure where Bob Cowan got his information about Leopold Stokowski's contract, but I don't think it's correct. According to the Fantasia story meeting notes from the fall of 1938, the idea was that an insect orchestra would play the overture to the "Nutcracker" suite--not that it would have any larger role in the film. Walt himself came up with the idea of an insect orchestra, in a "Nutcracker" meeting on September 28: "It would be awful cute if this orchestra were made up of little bugs." When that idea had been incorporated into a continuity and (apparently) some sketches, on October 24, Walt spoke enthusiastically about it: "We've just shown off this 100-piece orchestra of Stokowski's playing; then the Toccata and Fugue and have gone to town on concentrating on the power of this thing, and now we start out again. The audience begins to get bored as we pick up with more music and Boom! something changes! he's conducting bugs!" He continued: "I would like all possible suggestions with quite a bunch of the little bugs and their violins. There's nothing new with the bug orchestra--we've done it before--but the connection with Stoky is new. We've always made them clown, but we're treating them from a serious angle. We've seen a lot of good things spoiled because we got scared and gagged too much. Make them cute without going too far." There's never a hint that the insect orchestra and its conductor might substitute for Stokowski.

I appreciate Michael's comments! The information I had was from the original owner and not from any research I personally conducted. Obviously, Michael has much more inside knowledge than I do on the subject so I'll add his comments to the item's description in my database. Regardless, it's an item that went through some level of development, but never made it to the final production. Thanks, Michael, for your comments -- they certainly have expanded my knowledge on the subject.
--Bob Cowan