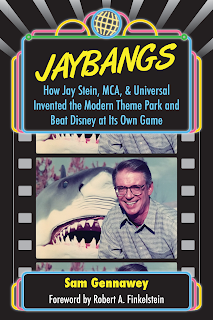 One more interesting book just released by Theme Park Press. According to the publisher:

After years of sitting fat and happy atop the theme park totem pole, Mickey Mouse discovered a big cat in his backyard named Jay Stein. Against stiff odds, corporate politics, and fierce opposition from Michael Eisner's Disney, Jay Stein founded Universal Studios Florida. This is how he did it.

Starting in the mailroom of MCA (now NBCUniversal), where his duties included delivering messages to stars like Alfred Hitchcock and Ronald Reagan, Jay Stein soon found himself in charge of the Universal Studio Tour, reporting directly to MCA chairman Lew Wasserman. He became a keen observer of what Walt Disney had accomplished in Disneyland—and how one day he might do even better.

That day came when Wasserman gave Jay the go-ahead to build a Universal theme park in Orlando, Florida. With help from Steven Spielberg, Jay got to work, in Jay style: no excuses, no retreats, no failures. Despite Disney's relentless attempts to sabotage the project, and ruinous infighting among members of his own team, Jay did not give up.

When the new theme park opened in 1990, it was full of Jay's patented "JayBangs"—rides and attractions that stunned, shocked, and surprised guests, dousing them with water, blasting them with air, heat, or cold, and giving them what the Disney parks of that time lacked: fear and visceral delight.

It was beating Michael Eisner at his own game. It was catching Mickey in a trap he couldn't aw-shucks his way out of. It was Jay Stein's triumph. But the man who went from delivering messages to building theme parks wasn't done yet...]