In Garry Apgar's great article about Walt Disney's connections with Connecticut in the April issue of Connecticut Magazine there is a rich array of illustrations (about 20 in all), including this never-before-published group photo of Walt's Red Cross training unit in Connecticut, generously supplied by the Walt Disney Family Foundation. 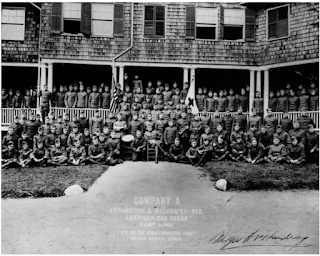 Here's a detail, highlighting Walt's position in the picture:

As an added note, that group photo of Walt's Red Cross unit in Greenwich is signed by Major H. P. Harding, the men's commanding officer. He's the fellow seated up front in the chair.

I don't want to sound like a doubting Thomas, but the highlighted circled head does not looked like Walt.
Walt might be in the pic but it does not look like him here ... to me! Just saying! ;-) http://cdn.images.express.co.uk/img/dynamic/141/590x/Walt-Disney-618650.jpg

Your point is well taken. In fact, the taller fellow to Walt's right in the photo looks a lot like him, too (at that age). However, I have it on impeccable authority that in this instance Diane Disney Miller made the identification.

Garry Apgar said...
This comment has been removed by the author.
4:38 PM