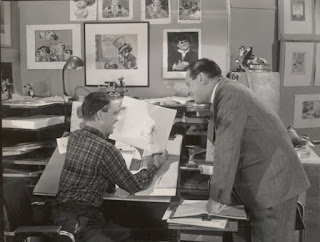 The last two weeks have been extremely busy on my end as I took advantage of the Xmas and New Year break to catch-up on a lot of Disney-history-related work. I thought it was time to give you a quick update.

With Walt's People - Volume 17 released on December 24, I am now working on finalizing Volume 18 and building Volume 19.

I also spent a lot of time reviewing the galleys of They Drew As They Pleased - The Hidden Art of Disney's Musical Years (the second volume in the series) and it looks stunning. The cover image is my dream come true, and the amount of gorgeous, never-seen-before artwork is even higher than in volume 1!

I have also started writing five from the seven chapters that will be included in Volume 3: The story of the Story Research and Character Model Departments, Eduardo Sola Franco, Johnny Walbridge, Campbell Grant, and Martin Provensen. Over the next few weeks / months I will try to improve those chapters and to start writing the missing two (James Bodrero and John Parr Miller).

In parrallel to all this, I was also reviewing the galleys of an in-depth chapter about the making of The Reluctant Dragon, which I was asked to write for an upcoming book project which I will hopefully be allowed to discuss in detail on this blog in a few months.

And, of course, I am still helping Ross Care put together his fascinating book of correspondence with Wilfred Jackson and I am hoping to see 2016 mark the release of Mel Shaw's autobiography, if all goes well.

These are fantastic news, Didier! What an amazing amount of information on Disney artists.
I can not wait to have these new books.
Congratulations!

These sound amazing. Looking forward to it.

I can not wait to read all of those books and thanks for all the infos through the year.