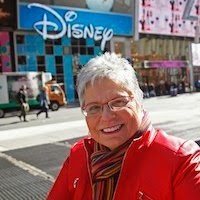 This just in from Lorraine Santoli and Bob McLain (from Theme Park Press):

[Ever wonder how the Mouse House markets The Walt Disney Company and its many diversified businesses? Lorraine Santoli, former 20-year-plus Disney PR, marketing, and synergy executive, tells all in her upcoming book, “Inside the Disney Marketing Machine”.

Focusing on the Michael Eisner and Frank Wells era of explosive company growth, Santoli shares her Disney marketing experiences from a rare insider perspective, with contributions from over twenty-five of her colleagues, all of them top tier Disney marketing and entertainment executives.

From her role as a publicist promoting Disney films and TV shows, to overseeing Disneyland’s key anniversaries, attraction openings, and special events, to her decade-long position as director of Corporate Synergy, Santoli invites readers to take a seat at the Disney marketing table for a first-hand view of the process that has put Disney at the top of the marketing hill in corporate America.

“Inside the Disney Marketing Machine” will be released in Spring 2015 by Theme Park Press.]
Posted by Didier Ghez at 12:02 AM