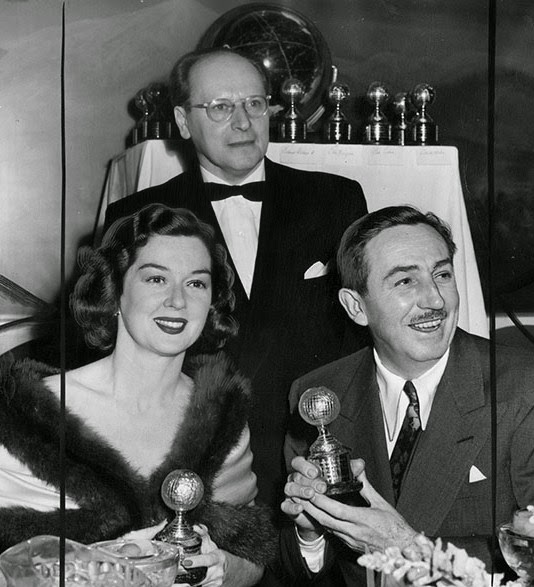 This just in from David Lesjak:

This year’s award’s season launched January 11, with the annual Golden Globe awards extravaganza. Founded in 1943, the Hollywood Foreign Press Association, (comprised of journalists who cover the American film industry but are affiliated with foreign publications), has been handing out the prestigious award since it was initiated as a fundraiser in 1944.

Walt Disney personally won a total of five Golden Globes during his lifetime:

1948: Bambi – for “Furthering the Influence of the Screen.” Although this feature was released in the U.S. in 1942, Bambi’s international release was delayed until 1948. In this post’s accompanying photo, complete with a newspaper editor’s crop marks, Disney is seated beside actress Rosalind Russell. Standing behind the pair is the association’s president, Frederick Porges. The ceremony was held at the Hollywood Roosevelt Hotel.

1953: the Golden Globe Cecil B. DeMille Award for Continuous Achievement. Initiated in 1952 in honor of the famed Hollywood producer, the first award went to DeMille himself. Walt Disney was this special award’s second recipient. Other honorees have included Darryl F. Zanuck, Judy Garland, and Gregory Peck.