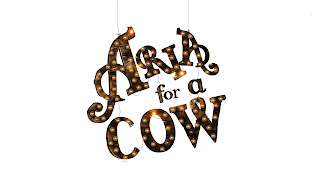 This just in from Dan Lund:

Aria For A Cow, an animated short based upon a song of the same title by the award-winning team of Howard Ashman and Alan Menken, the men behind the music of Little Shop of Horrors, The Little Mermaid and Beauty and The Beast, is about to find its voice.

A multi-generational and multinational team of talent will enter a Santa Monica recording studio On December 6, to give voice to a cow to whom attention must be paid.

On Tin Pan Alley, great songs never die; they just wait around for the right moment to arise.   When veteran Disney animator, Dan Lund, contacted Sarah Ashman Gillespie - webmaster of Howardashman.com, a website about the work of her late brother, lyricist, director and writer, Howard Ashman – the moment was right for Aria For A Cow.

Working with great enthusiasm and talent and little money, the Aria team has created a kind of crowd-sourced, guerilla-filmmaking style,  which Thompson believes is the future of the art.   “We’re a small group of passionate people from all over the globe, working in new way, finding new solutions with limited resources and using technology to leverage talent from across the globe.”

It is a style of filmmaking that has garnered Sussigan and Mannam much attention and numerous awards for their first two animated shorts, Broken Wing and Swan Cake.

“I believe Howard would be thrilled to be contributing to the development of talented young people,” Gillespie says.  “Although his first love was theater, he loved animation – and he specifically loved seeing his words come to new life through animation.  For me, seeing Aria spring to life in the hands of such enthusiastic young talents is an absolute gift.”

Dan Lund, the mastermind behind the project, is particularly excited about working off the grid,  "I wanted this production to be fun and gather momentum that could transcend the lack of budget and studio support. The only way to get that forward motion is to surround yourself with people with something to prove."

In keeping with the way they worked on their first two shorts, Sussigan and Mannam have opened up the animation work on this project to a virtual world of creators.  Eager animators – set designers, model makers and background artists from Burbank to Bombay are now on the Aria team.  “Crowd sourcing can be challenging in terms of getting your point across over the Internet,” Mannam says.   “However, when we told people we were putting on this show, they immediately grabbed their toolboxes and marched into our global barn.”

A welcome surprise to the "Global Barn" is the recent inclusion of Linda Bel and the San Francisco Academy of Art University.  “Seeing Linda and her students showing up and ready to put on a show makes me feel like Linda and I did back in the day”, says Lund. Bell and Lund started their career together at the Disney studios animating on  "Beauty and the Beast" and remember fondly their time animating to the songs of Alan Menken and Howard Ashman.

For Amos Sussigan, the project’s art director, working on Aria For A Cow is both a professional and a personal milestone, “Howard Ashman made my childhood a little more magical.  Beauty and the Beast is one of the first movies I ever saw.  When I go home to Switzerland, my grandparents and I still watch it together.  So I am both honored and excited to be able to work on such an ambitious and creative project.”

Production on Aria For A Cow has just begun.  With the good will and talent of artists around the world, a new song from Ashman and Menken will be brought back to life – through the magic of animation – in the spring of 2014.]