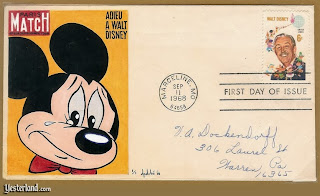 From Jim Korkis (Do not forget to pick up Vault of Walt Volume 2 and The Book of Mouse!):

[A witch doctor in the Belgian Congo reportedly used a homemade mask of “Mikimus” to provide a little extra magic.  When actor Doug Fairbanks went on a world tour, he showed Mickey Mouse movies to head-hunters of the South Seas Islands to keep them friendly.

At the 1939 New York World’s Fair, A.W. Robertson, Chairman of the Board of Westinghouse, and Grover Whalen, President of the 1939 New York World’s Fair, placed a Mickey Mouse wristwatch into a sealed time capsule not to be opened for five thousand years (the year 6939) and buried fifty feet deep.  Also included were a kewpie doll, a pack of Camel cigarettes, a Gillette safety razor, a dollar in change, copies of “Life” magazine and more.

Excerpts from Mickey Mouse cartoons appeared in movies from other studios. A short clip from Mickey Mouse’s “Ye Olden Days” (1933) is seen at the beginning of the Fox Films, “My Lips Betray” (1933). Republic Pictures Corporation film “Michael O'Halloran” (1937) features an excerpt from “Puppy Love” (1933).  In Paramount’s “Sullivan’s Travels” (1941) is an excerpt from “Playful Pluto” (1934).

When a United States commemorative stamp was released in 1968, it featured the smiling face of Walt Disney but not Mickey Mouse.  Postal regulations at that time prohibited the placing of a Disney copyright notice on its stamps.  However, other countries around the world did not have similar restrictions so Mickey first appeared on a ninety lira stamp from the tiny republic of San Marino in 1970 with an appropriate copyright notice.

The October 7, 1932 “San Antonio Light” reported that one of Mickey Mouse’s birthday parties (celebrated that year on October first) was held at the prestigious Coconut Grove nightclub housed in the Ambassador Hotel in Los Angeles, with "Walt Disney cutting Mickey's birthday cake."]