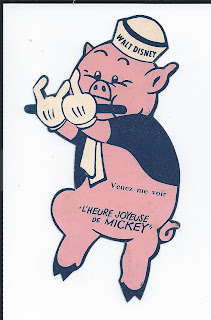 I am completing at the moment a monograph about Walt's trip to Europe in 1935 and working on the final details (much more on this in the next few months, hopefully). A paragraph I just added last week includes the following information:

"One day during his stay in Paris, Walt strolled down the Avenue des Champs-Elysées, the most famous street in Paris, at least as far as the Lord Byron cinema, which every Thursday to Sunday, from 11.00 am to a quarter past noon showed a selection of Mickey Mouse shorts and of Silly Symphonies.  This compilation of Disney cartoons was probably the program L’Heure Joyeuse de Mickey, which United Artists had released in 1934 and which would be featured in various cinemas in France and Belgium until 1936. It included the cartoons Giantland, The Pied Piper, Lullaby Land, The Grasshopper and the Ants, Mickey’s Gala Premier, Three Little Pigs, and Funny Little Bunnies. Between the last two cartoons, a non-Disney comic routine was inserted, titled La Morale de cette Histoire (The Moral of this Story) and featuring French singer André Perchicot.  The significance of Walt discovering a cinema screening solely Disney shorts cannot be understated, since this feature-length program convinced him more than ever that audiences would be willing to accept a feature-length cartoon." 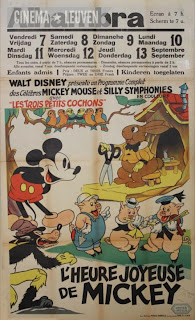 That’s a fascinating discovery and insight as to what might have launched a entertainment revolution. Or at least gave it a nudge. I can’t wait to read your monograph about Walt’s European trip.