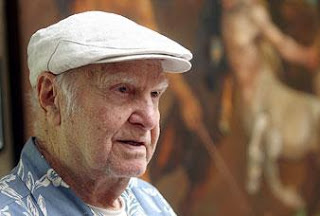 According to Mike Peraza, one of Disney's greatest concept artists, Mel Shaw, just passed away.

The news saddened me terribly. I have admired Mel's art for years and he was among my top three or four Disney concept artists along with Ken Anderson, Ferdinand Horvath and Albert Hurter. I also had the pleasure of having lunch with him a few years ago thanks to John Lounsbery's daughter Andrea and to Diane Disney Miller. He was a wonderful human being with incredible stories to tell, even in his mid-'90s.

I am still working with Andrea to get his autobiography (Animator on Horseback) released at some point. Let's hope this happens soon since Mel's life is almost as fascinating as his art.

In the meantime, you can read an in-depth interview with him in Walt's People - Volume 12, thanks to Paul F. Anderson.