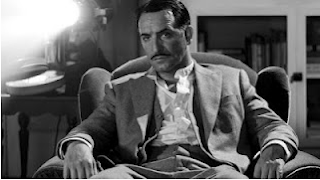 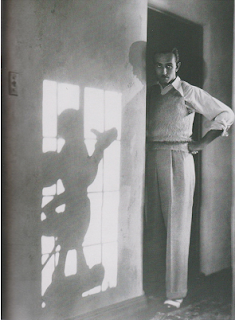 [Yesterday I finally had a chance to see "The Artist."
One thing that struck me about the film was how much its star, Jean Dujardin, resembled Walt at about the same age. Dujardin, 39, is a virtual dead ringer for Walt, circa 1940. He doesn't quite have the angular, aquiline nose of Walt, ... but the dark, slicked-down hair, the mustache, the smile, the buoyant personality, the intensity, .... the constant smoking! ... of the character he plays are all almost a perfect match.
A few days ago one of your readers, Jeffery Butler, nominated Dujardin for the starring role in "Walt," the imaginary film depicted on that faux movie poster by Pascal Witaszek, set around 1928, with Ryan Gosling as Disney. Prompted in part by Witaszek's fragmentary vision, and now, especially, by "The Artist," one can readily imagine a compelling but factually faithful bio-pic of Walt's early years along the lines of "The Artist," ... in black and white, perhaps, with the same careful attention to detail, casting, locations and settings. Think of the stylish way Walt dressed, of him staying at the Algonquin Hotel in New York, as he tried to get "Steamboat Willie" off the ground (sharing a room there with Carl Stalling, rinsing their socks out in the same sink), of Walt conferring with Pat Powers in his office in midtown Manhattan, with Jack Alicoate, the editor at "Film Daily," etc. Even the tomfoolery of Walt and his young pals in the Kansas City days, with Laugh-O-gram, and, later on, playing polo with Spencer Tracy and Will Rogers, would be very cinematic, particularly if the jazz-era music on the sound track were as artfully selected and paired with the action as it is in "The Artist" (and in so many of the early Mickey Mouse cartoons).
There ought to be enough drama in the characters Walt came in contact with, the locales he operated in, and the very real challenges he met and surmounted, to allow for a commercially viable cinematic vehicle. Far flimsier stuff has been spun into motion picture hagiography by Hollywood -- telling the story of far less consequential figures in show business or American culture.
Among the many realistic little touches in "The Artist," incidentally, were those old-fashioned two-button light switches like the one seen on the wall in that familiar photo of Walt, circa 1930 (above).]
Posted by Didier Ghez at 12:02 AM