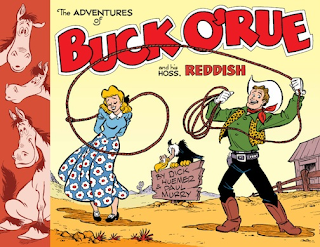 Once again, here is a book, which is only indirectly related to Disney but which I will pick up when released:

[In 1951, Disney Legend Dick Huemer, on hiatus from the Studio, teamed with acclaimed comic book illustrator Paul Murry to create this sendup of all things Western - The Adventures of Buck O'Rue!

These are the adventures of square-jawed, square-shootin’, hopelessly naïve cowboy Buck O’Rue and his beloved horse Reddish, his nearly equally beloved sweetheart Dorable, and all of the bad men of Mesa Trubil--”The Town without a Country”.

Compiled from multiple sources including original Production Proofs, The Adventures of Buck O'Rue reprints the strip's original run from January 15, 1951 to December 7, 1952. Enriched with biographies for both Dick Huemer and Paul Murry, archival photos, promotional materials, creators’ notebooks and sketches, scripts, The Adventurres of Buck O'Rue includes a foreword by Don Peri, author of Working with Walt.

Dick Huemer's list of credits includes animation for the Max Fleischer Studio (Out of the Inkwell, KoKo the Clown), during the 1920s, and story creation/direction for several of the most famous Disney films, notably Fantasia and Dumbo.

Paul Murry was the most productive American Mickey Mouse comic book artist from the 1950s to the 1970s. His illustrations, with their distinctive style and unforced humor, have been reprinted by the millions throughout the years, and continue to delight readers all over the world.