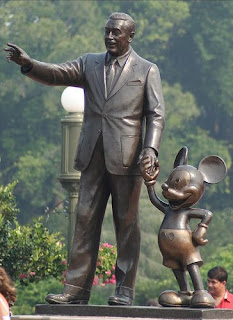 [Ever since it appeared at Disneyland in 1993 and later at the other Disney theme parks, there have been a variety of stories on unofficial Disney websites of what Walt is pointing at and saying to Mickey. Even the Disney Company has suggested that at Walt Disney World, Walt is pointing to the statue of his brother Roy ("Sharing the Magic") on Main Street. Here is what Disney sculptor Blaine Gibson told the media at the unveiling about the Partners statue in 1993:

"I thought that it was an honor to do a statue of Mickey and Walt who was, in my opinion, the real genius behind all of this. For me, it was a labor of love. Walt gave me and many others some of the happiest times of our lives, and this project was important because it wasn't just for Walt...it was about Walt. Our faces are all we really have that can tell people who we are. Many people asked me what Walt might be saying as he stood there with Mickey, and the expression I tried to capture was Walt saying to Mickey, 'Look what we've accomplished together', because truly they were very much a team through it all."

Also at the dedication, Marty Sklar who was then President of Imagineering told the press, "From now on you can get three symbols of Disneyland in one photograph. What a memory and souvenir of Disneyland that will be."]
Posted by Didier Ghez at 12:29 AM

I asked Blaine about this a little over a year ago. He told me something very similar. He said that Walt was pointing out to the crowds coming up Main Street. Look, Mickey, look at all those happy people.