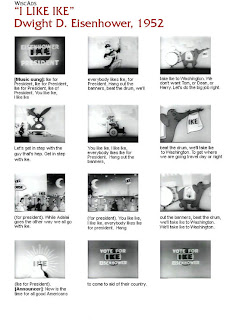 [I am just finishing an article for my Wednesday MousePlanet column that will cover some of the background of the poltiical animated commercial the Disney Studio made for Dwight Eisenhower in 1952. The "I Like Ike" spot (officially titled "We'll Take Ike (to Washington") is pretty fascinating. It is the only political commercial the Disney Studio made and "Ike" was the first candidate to use television advertising.

As I was finishing up the article I came across the fact that the person who approached the Disney Studios to do the job was Jacqueline Cochran (a cosmetics executive and well known woman aviator who had severa aviationl awards). Even more amazing is that she corresponded with the Disney Studio. I found two letters (through various sources) including one from Producer Bill Anderson and another that was an excerpt from a letter by Roy O. Disney.

In his letter, Roy also included a list of the Disney employees who contributed their time and efforts to the cartoon. That list and other related correspondence is in the Jacqueline Cochran Papers, Eisenhower Campaign Series, Box 2, in the Eisenhower Presidential Library and Museum in Abilene, Kansas patiently awaiting some other researcher to journey there and reveal its contents.]

I hope someone can help. There are quite a few treasures that can still be uncovered in archives, when one knows where to look. For example, I would love to know that one of you will soon be visiting at some point in the future the library of Bigham Young University in Provo, Utah since its seems to contain important papers by and about Disney artist "Wetzel O. Whitaker" (Judge Witaker). It looks as if Judge Whitaker wrote two books:

Looking Back: An Autobiography (which I suspect is an Oral History more than an autobiography as such) and Pioneering with Film.

I have the feeling that copies of those books only exist in manuscript form at BYU (http://history.cfac.byu.edu/index.php/Wetzel_O._Whitaker).

I would interested in at least getting answers to two questions:

1. Does the manuscript of Looking Back really exist and does it contain anything about Whitaker's career at Disney (if so how I would love to get copies)

2. Does the manuscript of Pioneering with Film contain any reference to a possible involvment on the Disney Studio in the '60s on the making of the movie Man's Search for Happiness for the New York World's Fair (this was discussed on the blog a while back)?

Hello, I happen to be a full-time student at BYU and would be happy to help-out with what you're looking for. If you're looking for specific information contained within a large manuscript, I won't be able to read through the whole thing searching for details, but I can help locate things for you or do simpler things if it would help?

This is great. Could you email me at didier.ghez@gmail.com ?