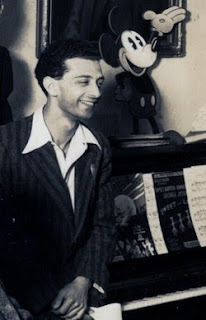 As mentioned, I am working at the moment on an essay about Disney artist Perce Pearce. This is proving to be a fascinating process as it allowed me to stumble upon sources that I had no idea existed (which I mentioned on the blog as soon as I discovered them). I had a similar experience while working on an essay about Joe Fowler and Carl Bongirno for an upcoming book edited by Chad Emerson.

There are many other key Disney artists and executives that would deserve to be much better known than they are.

Since once has to start somewhere, I have decided to try and explore the life of storyman Otto Englander. The issue (and opportunity) is that one finds quite a bit of information about Otto's career during the Golden Age: his role on Snow White, Pinocchio and Dumbo is relatively well know. But he then seems to fade out and reappears in the oddest places: an abandoned animated-feature about Sherlock Holmes in the '40s, a TV special in the '60s, The Aristocats later on.

Could anyone help me piece together this mystery? Where should I start?
Posted by Didier Ghez at 1:07 AM

I remember Otto Englander, but without the hair. He was completely bald when I arrived at the studio. I knew Otto was a writer, and had been with Disney for many years. He seemed to be involved with a number of projects over the years both live-action and animated.

When Walt entered network television, Englander worked on a lot of that material for Disney. Since I was still quite young, I never really got to know him. Although he was around up into the sixties, if I recall.

I wish I could tell you more about Otto Englander, but that's pretty much all I know.