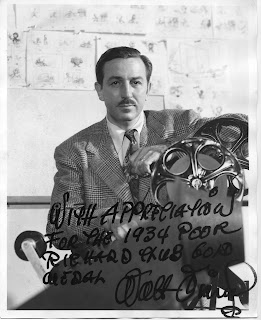 While in Philadelphia two weeks ago, I had the pleasure of finally meeting face to face Bob Kolakowski who has been helping me for quite a while with some transcriptions for Walt's People. When we met, Bob showed me the above photo and shared the story behind it.

[The Poor Richard Club was a private club in Philadelphia, Pennsylvania, whose members were mostly members of the advertising industry. The club was founded in 1906 with 75 members, just a year after a similar club opened in New York. The advertising industry was on a quest for more respectability, and the clubs were created as a way to promote and enforce ethical guidelines. Nevertheless, they functioned largely as places to nurture business, social, and political relationships. ]

On January 17, 1934, during its 29th annual dinner, the club presented Walt Disney with a special award. Walt could not attend and the award was therefore received in his name by Eddie Cantor. The above autographed photo is Walt's thank-you note. 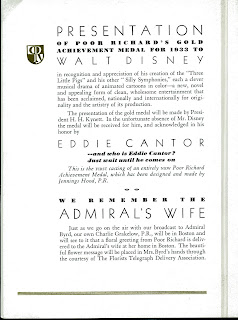