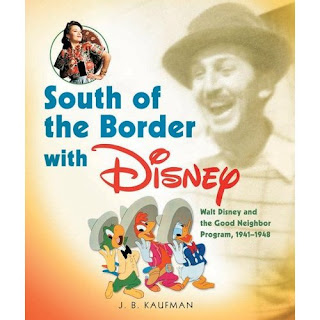 Don't walk, run... towards Amazon to pre-order it or towards your closest bookshop in October to buy it!
I have just received a review copy of JB Kaufman's new book, South of the Border with Disney: Walt Disney and the Good Neighbor Program 1941-1948. Let's admit it: knowing JB I expected something really good text-wise, something really in-depth, something in which I would learn a lot, something that would fill half a million key gaps in Disney history. I had been looking forward to this book since 2001. Eight long years. So if I said that I could not wait to open the package that contained it, you will not be surprised. What happened next was not expected though: when I started browsing through this new book I simply could not believe my eyes. The text is more complete and more in-depth than literally anything I could have imagined. I believe that only four Disney historians are as thorough: Michael Barrier, John Canemaker, Paul F. Anderson and JB Kaufman. So there is even more to learn in the text itself than my wildest dreams built over 8 years had made me expect. How is that for a stunning start?
But there is more! The quality of the illustrations is as astounding as the text. At least half of the visual documents are "never seen before." I had goosebumps by looking at almost every single page of this book. I had started to think that aside from the Canemaker books and The Disney that Never Was by Charles Solomon, we would from now on be offered either great text-books (Working with Walt by Don Peri for example) or great art-books with no text (The Disney Archives Series for example). Unfortunately JB's Silly Symphony book had not dispelled this impression (great text with uniteresting visual documents).
South of the Border with Disney shows that I was wrong: ideal books can exist. Books about Disney history as we dream them. Books that are as close to perfection as we will ever get.
By the way: this is the first book released under the Walt Disney Family Foundation label. What an impressive way to start. Disney history is truly alive and well today.
Posted by Didier Ghez at 3:41 AM

Wow. What a review. I've been anxiously awaiting this book, too, so it's great to hear that it delivers on the high expectations!

This is the book I've most been looking forward to this year. I'm glad to hear it exceeds all that I hoped it would be. Now I really can't wait to get my hands on it.