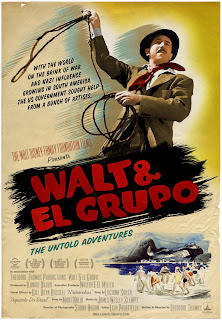 This just in from Ted Thomas:

["Walt & El Grupo" will come to the screen in September!

Yes, it is a special little gem of a film, but it still requires enthusiastic audiences on the opening weekend to get a crack at staying in those theaters for another week and, one prays, another and another. So, put it on your calendar, tell your friends, and let's all go to the movies! Our movie.

Walt Disney Pictures is helping out with a limited release, and the first cities to open will be on

Friday, September 25, the film opens in
Seattle - The SIFF Cinema

We have a poster designed by the Walt Disney Pictures Creative Print folks, (above); a trailer, which will be in selected theaters in the coming week (and on the web soon after);

and a generous quote from Leonard Maltin: "A revelation for Disney fans everywhere. The past comes alive in this vivid film about a once-in-a-lifetime adventure."

If the film is not currently headed to a theater near you, our understanding is that the best way to change that is to contact the manager of said nearby theater and ask for it. Let them know how to find out more about the film, and that there is a local audience for it.]

What a BEAUTIFUL poster!
Really looking forward to see the film.

Will the poster be available for sale? Great Graphics!

Will the film be playing any theaters in Canada?

i saw it twice here in brazil - it is masterpiece.