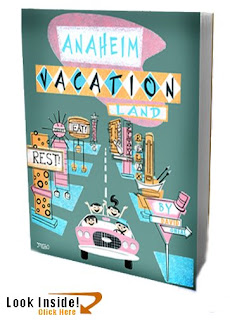 This just in from Dave O'Neal. Not sure yet what the book is worth. I did not buy the first edition as the subject seemed too narrow for my tastes but for some reason I decided to give it a go this time around.

[On July 17th 2009, the second edition of our book"Anaheim Vacationland" will be shipping.

Anaheim Vacationland tells the story of the area that surronds Disneyland. The motels, shops, places to eat, the crazy extinct attractions likethe Japanese Deer Park, Wax Museums, and so forth.

The large full color 244 page book has been updatedand since the first one sold out so fast in 2008, we have done a second edition for you.

When Walt Disney chose Anaheim as the city to build Disneyland in, everyone in the public and his own friends, thought he was crazy. All that was in Anaheim in 1955 was farm fields and dusty old roads. All that changed drasticallyin 1955 when the new theme park opened.

Anaheim was now known as Vacationland. In this second edition of the sold out book by David Oneal, you will be treated to a treasure trove of historical photos, and first hand accounts of the effect that Disneyland had on Anaheim. Disney legend Bob Gurr, Marty Skylar, Buzz Price (the man who decided on Anaheim as the place to build Disneyland) and otherDisney historians like Don Ballard and David Oneal take the reader from the Anaheim boomtown of the 1950's and 60's to the decay of the 70's and 80's and eventual rebirth as the resort district that is today.

244 full color pages with amazing images of the Spacemotels, Tiki Motels, western motels and googgie buildings! Plus explore the history of the Movieland Wax Museum, Japanese Deer Park and other areas of Vacationland. The first book was an instant sell out, get your copy today.

Due to a special deal with our printer we are able tooffer the book at a special price of $24,99

You can see tons of preview pages, images as wellas order the book now at: http://anaheimvacationland.com/

I hope you enjoy the new book, loaded with Disney legends stories, images of the park and surronding area from 1955 to now.]