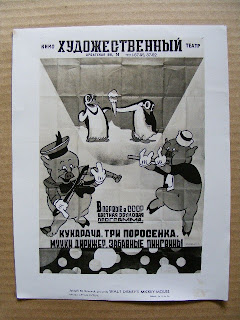 A few years back I posted the program of the Moscow Film Festival from the mid-'30s and mentioned at the time:

I believe this photograph is of a Russian movie poster that was released around the same time. I just bought this photograph (not the poster itself unfortunately) last week on ebay.
Posted by Didier Ghez at 1:05 AM

Well, it does say "For the first time in the USSR, a program of color sound films".