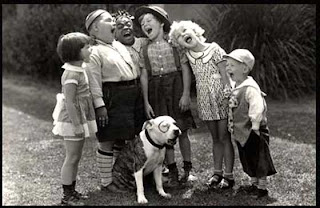 [Do you remember the list of non-Disneys films with some kind of Disney reference/ connection in the film itself, posted on your blog in December 2006, including many additions/ comments?

I saw some old “episodes” of the Hal Roach Studio’s “Our Gang” short film serial on TV yesterday. Then I suddenly discovered another Disney reference in a non-Disney film. In the film “For Pete’s Sake” (1934) you see the gang’s dog attacking (!) a Mickey Mouse doll in a toy store. The doll was one of those made by Charlotte Clark.

(The film was computer colorized, and Mickey Mouse was correctly colorized with his red pants.) Interesting enough, the director of this film, Gus Meins (1893 – 1940), also directed the Laurel and Hardy film “Babes in Toyland” (also from 1934 and produced by Hal Roach), where some Disney “characters” appears. ]

And from Jim Korkis:

[To add to the Doug Fairbanks film discussion: Remember that Fairbanks was married to actress Mary Pickford who LOVED Mickey Mouse and at one time was going to star in the first Disney feature film, a combination of live action (Pickford) and animation of "Alice in Wonderland" before "Snow White". More importantly, here is the story from the 1986 book "Mickey Mouse: His Life and Times" on page 23-24: "When fellow film star Douglas Fairbanks went off on a world tour, he, apparently, showed Mickey movies to the head-hunters of the South Sea Islands" and reportedly said that doing so saved the lives and heads of those in his safari.]
Posted by Didier Ghez at 5:41 AM