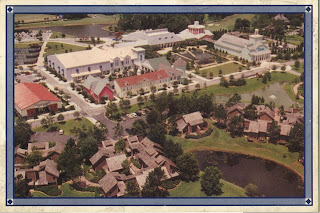 This just in from Jim Korkis:
[Old Disney Institute, before it became the Disney Vacation Club Saratoga Springs. That long white building with the orange roof in the middle of the picture was where the animation studios were where guests could learn cel painting, history of animation, traditional 2-D animation, computer animation and stop motion animation. Across the street to the left is another white building with a reddish orange roof and that was the Disney Institute Cinema where guests includding John Culhane, Leonard Maltin, John Canemaker, John Lasseter, Bill Justice, Ward Kimball and many more gave presentations.]
Posted by Didier Ghez at 3:34 AM

I was a member of the Disney Institute Opening Team. I was an usher for the various evening performances and was able to attend a lot of the shows, sometimes just to help fill some empty seats. There were some really fantastic shows too bad it never caught on.