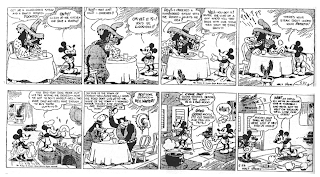 [Numerous reports today that Gemstone, the publishing arm of Diamond Distributors, is ending its Disney license, meaning that the core Disney characters once again have no American publisher.

According to a post on The Disney Comics Blog:

Gary Leach, who has been doing art and editorial work for US Disney comics for over two decades, reported on the DCML yesterday that “Gemstone is not renewing the Disney comics license, and won’t be putting out any more issues”. This sad news means the end of Disney comics in the United States, at least those with classic Disney characters like Donald Duck and Mickey Mouse. Gary added that “Disney is looking for someone else to take the license” and he believes that they do have some candidates, although nothing is nailed down at this point.]

Gemstone and Steve Geppi have posted a response to the rumors on their site, and are stating that Disney comics will continue in 'some form' from Gemstone.