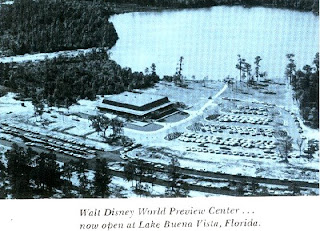 [Back in the 60s, before the Magic Kingdom was built, there was a “Disney World Preview Center” on Hotel Plaza Boulevard. There were Disney hostesses who showed a scale model of the WDW property, a film of the project and more in order to get people excited and informed about Disney's latest entertainment venture. The building is still there and is now known as the “Amateur Athletic Union.]

That does bring back some good memories.