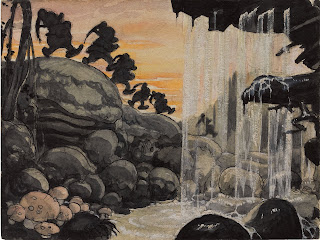 Speaking of Tenggren, Gunnar Andreassen and Emmanuel Bourmalo noted that:

[there was another Tenggren piece that was sold on Heritage last week. Description: GUSTAF TENGGREN (American 1896 - 1970). Seven Dwarfs study, c. 1938. Mixed-media on board6 x 7.75 in. Not signed. This concept study from the animated feature Snow White and the Seven Dwarfs conveys all the long-lasting charm of the merry Dwarfs in a beautifully composed image. It was sold for $ 9.560]

[I saw that you had the 'Snow White' Tenggren of the 'Queen' displayed -- I thought you'd enjoy seeing this Tenggren of 'Snow White' in rags with the 'Prince' at the well. Although created by Tenggren as inspirational for the film -- it was used in many different publications at that time and throughout the years -- exactly as the 'Queen' artwork. This piece has some irregular borders but is approx. 8'' x 12''.] 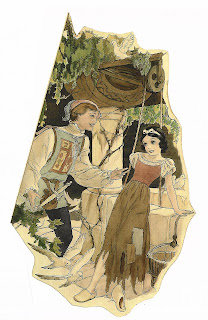 This material is one treasure!
Thanks for share with us.