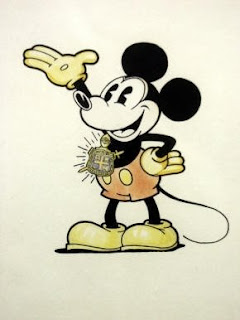 Jim Korkis has been in touch with W. Dale Dietzman, State Chapter Dad of Florida DeMolay to try and track down some of the DeMolay comic strips done by Walt Disney and Fred Spencer and received the following information and picture from Dietzman.

I don't have the cartoons except in much reduced form, and probably not all of them.

I am attaching something I assume you have, but perhaps not. This is a picture of the drawing of Mickey which Walt gave to Dad Frank Land, the Founder of DeMolay personally, and which is on his office wall (His office is preserved as it was when he passed away.)

Notice Mickey is wearing the DeMolay Pin of the 1920s which is the style Walt wore as a member of DeMolay.