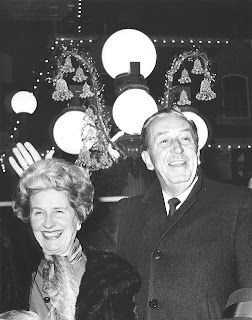 [This photo of Walt and his wife Lillian was taken December 1965 at Disneyland. They were there for the debut of that year’s Christmas parade. It was the last time that Walt was at Disneyland during the Christmas season. The next year he would be in St. Joseph’s Hospital where he would pass away ten days before Christmas Day.]