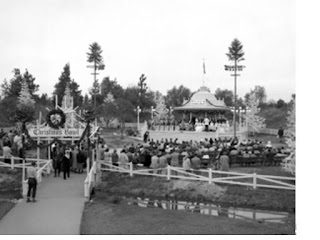 [I’ve gotten some feedback with folks wanting to know more about “Christmas Bowl” at Disneyland that preceded the better known “Candlelight Processional”. Here is a photo from Christmas 1956 where you can see what that first Christmas musical celebration looked like.

In December 1955, there was a live Christmas tree placed to the left of the entrance of Sleeping Beauty’s Castle. At the Magnolia Park Band stand near the “Jungle Cruise” there were individual choirs performing. This “Christmas Bowl” (officially named that in 1956) featured scores of local youth bands, and choral groups. That tradition led in 1958 to the creation of the first Candlelight Processional down Main Street developed from a concept by Charles C. Hirt of the University of Southern California School of Music.]

Didier - Thanks for the nice words about my site. I have 2 color images from the Christmas Bowl at Magnolia Park:

I love Disney Land ;)
I'm glad I knew the history!

I love Disney ;)
Im glad I knew the histories!
thanks..

It is a great blog indeed!