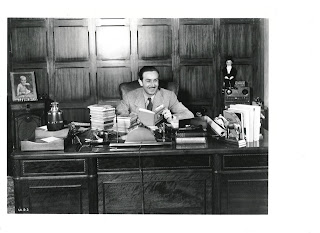 A very interesting story you gave us here ! I have a little bit to add to it.

Some weeks ago I bought a photo of WD at his desk in his office, probably taken in 1937. It was a very sharp photo, and I was able - with the use of a magnifying glass - to read some of the words of the title of a book that lay on his desk. "Jimmie" "blue envelope". I found the book on eBay: "Jimmie Dale and the Blue Envelope Murder" and even the same edition that WD had. I have since then read about the series and the author, and it was great to get more information from you!

Gunnar then went on analyzing all the elements in the photo, which I found fascinating. Here is what he came up with:

[From left to right.
(BO) = Item also in photos from his Burbank office

On the desk:
4. Wooden tray (for outgoing mail ?)
5. Stenography pad (?) and folder (for incoming mail ?)
6. Water Carafe with glass on tray
7. A little stand for a quotation/saying or a calendar ? (BO)
8. A miniature sword (letter opener/paper knife ?)
9. Item with Mickey (and Minnie ?) and another character. Could it be a cigar cutter ? (BO)
10. Ash tray with cigarette
11. Pair of scissors and some pencils
12. Desk pad (BO)
13. Two heaps of: German series of books with fairy/folktales: See enclosure 1
14. Electric desk watch with two pens. (BO) Still there in 1949 - probably one of the pens was used when signing contract with Kathryn Beaumont (voice of Alice) - there is a photo of this event.
15. In Walt’s hands: Andersen: Märchen (H.C. Andersens fairytales German edition, probably illustrated - in the same series as the other fairytale books
16. Statuette of a globe and a man (?) (BO)
17. A bit of a film roll
18. Letter or note: can read one word: “original” - but not the rest
19. Cigarette box (silver ?) (BO)
20. Pistol: Probably a lighter (BO)
21. Book: Jimmie Dale and the Blue Envelope Murder. See Wade Sampsons article: Walt Disney aka the Grey Seal
22. Book: Because of a semi-transparent dust cover the title is difficult to read. Perhaps : “ Great …….. Society”
23. Role of paper: a drawing ?
24. Two horses as book ends. Because of his polo interest ?
25. Book: Our America: A textbook for Elementary School History and Social Studies, by Irving R. Melbo, 1937, 402 pages. Includes a chapter about Walter Disney and Mickey Mouse
26: 4-6 other books: No titles visible

Behind the desk:
27: Telephone
28. Edgar Bergen’s puppet: Charlie McCarthy - probably smaller version than the original
29. Charlie is sitting on a metal box: The same box as on desk on early 1930ies photo ?
30. An apparatus that has something to do with the telephone: also on photos from the early 30ies.
31. A figure of a dog or horse (?) - also on the early '30s photos ?
Walt has a flower on his lapel
Enclosure 1 - German fairytale books:
Could these have been bought by WD in Germany on his Europe Tour in 1935 ?
The following titles can be read:
4 books by “Brüder Grimm”
2 books by H.C. Andersen (one in WD’s hands)
Des Knaben Wunderhorn
A book by Ludwig Bechner (?)
Reinecke Fucks
Till Eulenspiegel
Rübezahl
A book by H.P. Hebel
Die Blume im Lied]

I forwarded this photo to my friend Jim Korkis who had the following comments:

[The Charlie McCarthy ventriloquist doll is interesting especially considering the connections later. When Snow White was released, there was a special radio show of Edgar Bergen telling Charlie the Disney story of Snow White plus there was a special book (I have a copy) of Charlie being involved with the Snow White story. Bill Walsh was the agent for Bergen and later became a Disney writer and producer. Edgar and Charlie were in Fun and Fancy Free and then later on the first Disney Christmas tv show. ]
Posted by Didier Ghez at 12:53 AM