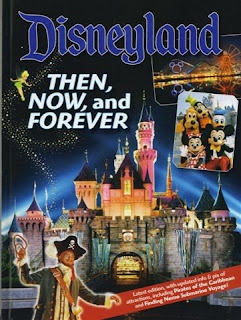 This just in from Tom O'Day:

Just saw your post regarding “Walt Disney World – Then, Now, and Forever.” I thought I would drop you a line and remind your readers of how this type of book came about. I collaborated with the irreplaceable Bruce Gordon in fashioning an entirely new style of Disney theme park souvenir book – a book that would not just highlight what was new but also honor the past in a totally refreshing way. The result was the extremely popular book “Disneyland – Then, Now, and Forever.”

Not unlike what my good friend Jeff Kurtti experienced with the new WDW book, Bruce’s role on the DL book was “chief designer, critic and advisor.” Together we split the research and selection of the photos/artwork about 50/50 and I was responsible for securing (and ghostwriting) the “Introduction” by Julie Andrews and the “Foreword” by Michael Eisner (I guess that secret is out of the bag!), plus authoring all text throughout the book. When “Disneyland – Then, Now, and Forever” premiered on May 5, 2005, as part of the launch of the park’s 50th anniversary, the Resort quickly sold-out of its entire stock within hours. During the 18-month long celebration the book broke merchandise sales records for a Disney theme park exclusive publication.

With the 50th anniversary now a distant fond memory I’m happy to report that “Disneyland – Then, Now, and Forever” has recently been updated with a slight redesign, plus a few new pictures and artwork highlighting recent changes to the Disneyland Resort including the popular additions to “Pirates of the Caribbean,” the “Finding Nemo Submarine Voyage” and “Toy Story Mania!” The new version of the book is currently available at the Disneyland Resort.

I think Jeff Kurtti’s new WDW book is a terrific addition to the “Then, Now, and Forever” line-up. It’s not easy squeezing 47 square miles (or 27,500 acres or nearly 40 years of fun) into a 192 page book! I too am looking forward to seeing “The Art of Walt Disney World.” 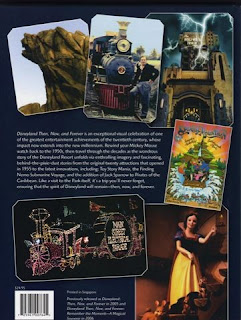