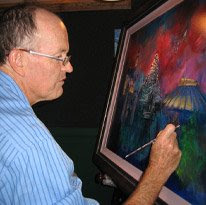 This just in from Alain Littaye:
[HARRISON ELLENSHAW has been asked to make some special appearances this summer, including this weekend at the California State Fair in Sacramento at the GOING HOLLYWOOD exhibit.

Harrison will be the featured guest on the first weekend of the fair (August 16th and 17th.)
A very special feature of the exhibit will be the rare public display of a private collection of artifacts from the Ellenshaw family including the Academy Award® that Peter Ellenshaw received for 1964's MARY POPPINS.

The exhibit which runs from August 15th through September 1st will feature an interactive sound stage complete with green screen technology, special visual effects demonstrations and Q & A sessions. In addition, the Herbie (THE LOVE BUG) car will be part of the display. Interestingly, three Ellenshaws worked on three different HERBIE movies: Peter worked on the original THE LOVE BUG, Harrison worked on HERBIE GOES TO MONTE CARLO and Lynda worked on HERBIE: FULLY LOADED.]
Posted by Didier Ghez at 1:15 AM

My name is Ciara Carruthers. I am the staff writer for a website called travelcalifornia.com and we currently trying to boost our link popularity. I wanted to ask you if you would be interested in selling a link to us on one of your pages?
We can offer $25 for the link, and would ask that the links would go from one of your pages to our page on the Disneyland which is found here http://www.travelcalifornia.com/Parks/Disneyland.htm

If this is something which you would be interested in, we could arrange the payment via paypal.

Thanks in advance and I look forward to hearing from you,

I am not opposed to the idea. But please email me at dghez@hotmail.com