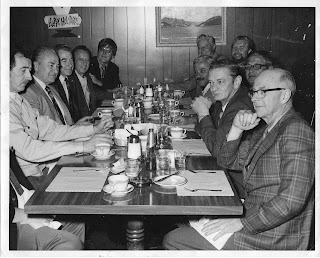 The one at the bottom features her mother with Disney artist Floyd Gottfredson; the one at the top features: second from the left Dave Davidovich; fourth from left Don Griffith; sixth from left (his head breaks the frame of the painting) her dad, Sven; first from the right is Ollie Johnston and seated next to him is John Lounsbery. Could anyone tell us who the others are?

[Update: I thought I had seen this photo before. And I did. It was posted on May 22, 2007 on The Animation Guild blog by Steve Hulett. Here is the complete caption:

Dale Oliver (with the mustache) was an assistant animator at Disney who ended his career as an animator on The Fox and the Hound. (Dale served as a glider pilot landing troops in Normandy on D-Day. The odds of glider pilots surviving at Normandy were minimal, and I once asked him: "What did you do after landing?" He replied: "Not too much, just kind of stood around until they shipped me back to England." Relaxed attitude, no? Probably helped during that June morning of 1944. Dale retired from Disney after a bad car accident)...

David Davidovich was a background and layout artist who started in the biz at Warners in the mid-1930s. Don Duckwall was a long-time production manager in the animation department, with just the right name to work at Disney's. Don Griffith was a veteran layout artist who worked at the studio through the '80s.

Bill Berg was a long-time Disney story artist (mainly on shorts) who was working for Les Clark at this time. (You click on Bill's link, you're going to think that Bill later became an assistant animator and character lead on Lion King and other epics. That's a different Bill Berg, IMDb to the contrary.) Julius Svendsen was a veteran Disney animator and story artist. Sven's career was cut short when he died in a boating accident.

Eric Cleworth was an animator and story artist in Woolie Reitherman's unit. Eric had been at the studio since '39; a few years after this photo was taken, he retired with his Disney stock options and had a long and comfortable retirement in Morro Bay. Hal King was a pillar of the Disney animation department, having been an animator and directing animator for decades. Ted Berman was a story artist who ended his career as a director on The Black Cauldron. John Lounsbery, one of the "nine old men," was at this time a directing animator. At the time of his death (six years after this picture), he was a director on The Rescuers. At the far right is Ollie Johnston, directing animator and the last survivor of the Walt-designated "Big Nine"."] 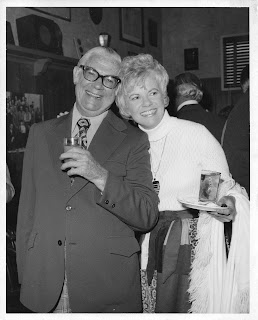 Light hair and dark moustache next to Lounsbery - Hal King. The gent on the left resembles what I have seen of caricatures of Dale Oliver...

Thanks. I knew those two by names only. Great to finally put a face on the name. Let's see if anyone can identify the others.

Oh! Before knocking ourselves out, let's look here! I quote: "From left to right: Dale Oliver, Dave Davidovich, Don Duckwall, Don Griffith, Bill Berg, Julius Svendsen, Eric Cleworth, Hal King, Ted Berman, John Lounsbery, and Ollie Johnston."
By the way, Didier, you (and Steve Hulett) mention David Davidovich - is this Basil (Vasilibasil) Davidovich (1/28/1911 - 5/28/1978), the layout artist? My phone directories have no mention of a DAVID Davidovich, while Basil is allover the drafts...

Yes, I think that is the one. I will ask Julie though. I remember that someone else spoke about him as David Davidovich (not just Steve). I thought that was a mistake at the time, but now I wonder.