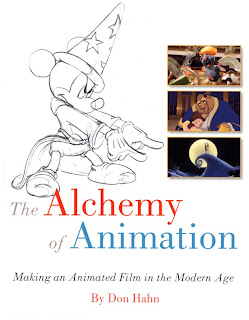 I have received from Disney Editions today the following information about Don Hahn's upcoming book, The Alchemy of Animation: Making an Animated Film in the Modern Age.
I have highlighted two sentences which I find particularly interesting.

"It’s been almost seven years since I wrote my first animation book, Animation Magic, and what I really wanted to do this time, was write a book about the making of animated films in the modern age, for a slightly older audience. I think this book is for everybody…people who love animation, people who are intrigued by the process, but most of all, people who just love movies.” say Don. “We were fortunate to be able to pack it with amazing, never-before-seen art from Disney and Pixar films through the ages, including a few sneak peeks at art from upcoming projects such as “Bolt” and “The Princess and the Frog!”

ABOUT THE ALCHEMY OF ANIMATION

The swift stroke of a pencil, the delicate positioning of a puppet, and the intricate process of building a 3D-render: these are but a few of the magical elements presented by Academy Award nominated producer Don Hahn in his book The Alchemy of Animation. This overview of the animation process across three mediums—hand-drawn, stop-motion and computer-generated—provides an entertaining and informed look at the sorcery behind the creation of such diverse Disney classics as Dumbo, The Nightmare Before Christmas and Toy Story, among others. Fans will appreciate the rarely seen artwork ranging from Snow White to the upcoming Bolt, and students of animation will relish the insider’s look at the many steps involved in making such masterpieces.

One of the most successful producers working in Hollywood today, Don Hahn has been working creatively as a filmmaker at The Walt Disney Studios for over 30 years.
Hahn produced the classic "Beauty and the Beast," which became the first animated film to receive a Best Picture nomination from the Motion Picture Academy. His next film, "The Lion King," broke box-office records all over the world to become the top-grossing traditionally animated film in Disney history and a long-running blockbuster Broadway musical. Hahn also served as associate producer on the landmark motion picture "Who Framed Roger Rabbit." His other films include "The Hunchback of Notre Dame," "Atlantis: The Lost Empire," and the 2006 short "The Little Matchgirl" which earned Hahn his second Oscar nomination.

He is currently developing the stop-motion animated feature "Frankenweenie" with director Tim Burton, and directing and producing several documentary projects. Hahn has also authored three books on the art of animation, including the upcoming The Alchemy of Animation, which provides the definitive account of how animated films are created in the modern age.]
Posted by Didier Ghez at 2:18 AM

Sounds fantastic! And some great "clues!"

I was amazed to see a reference to "Frankenweenie"! I think I was the only one in the house that liked it, but I guess it just matched my humor...