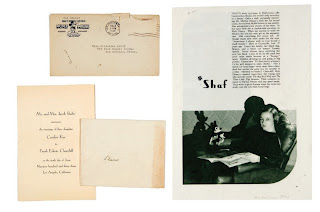 Hake's has just launch its new auction. Quite a few great items in this one, but the document I would most love to get a copy of is the following. If the highest bidder on this lot is among the readers of this blog, I beg you to email me after you get this letter and the article!
[An incredibly interesting lot giving insight into the life of Carolyn Kay Shafer who served as Walt Disney's confidential secretary as noted in two of the items included in this lot (also see her Studio Christmas card #1672). First and foremost is a two-page typed letter to a close friend dated Feb. 5, 1932. Pair of 8.5x11" stationery sheets, first sheet has Disney Studio address of 2719 Hyperion, Hollywood; second sheet has "Mickey Mouse Sound Cartoons" on bottom margin. First sheet also includes Mickey image. Body of the letter details her career including her move to Los Angeles where she "Started Working Temporarily For The Studio, But The Work Developed Into Such A Nice Position That I Stayed On. I Direct The Publicity For Mickey Mouse And Silly Symphony Cartoons And In Addition To That Act As Mr. Walt Disney's Confidential Secretary." Further text delves into her love life mentioning several engagements as well as interest in a "Very Interesting Young Musician Here At The Studio." This turned out to be the man she married and the wedding invitation is included in this lot. Letter is signed in ink "Carolyn." Lightly aged as folded but both sheets still clean and VF. Included is the original Disney Studio mailing envelope although this is aged, has margin wear and 1x2" clip from front top right corner. Good. The invitation is 4.5x6.5" and comes with original envelope. For wedding of June 10, 1933 of Carolyn to Frank Edwin Churchill. Lightly aged, VF. Final item is a one-page article from Feb. 1934 issue of American Magazine. Great photo of Carolyn with a Mickey Mouse book and doll plus brief text dealing with her career and noting that she personally answered Mr. Mickey Mouse's mail with receipt of up to 30,000 letters a month. Also notes she married Frank Churchill "Walt Disney's Musical Supervisor, The Young Man Who Recently Made The Big Bad Wolf And The Three Little Pigs Famous." This sheet is Exc. All would mat and frame to an impressive display. (J - $700 to $1000)]
Posted by Didier Ghez at 2:04 AM

This grouping was also for sale in his last auction, but it did not meet the reserve and went unsold.

- I went the Hake's to look at the items and saw some other items being sold (1937 Christmas items) that were the same as items in the Ingeborg Willy scrapbook. I put up a post with Hake's and Willy's items.
- Thanks for putting up the post that led me to this discovery!