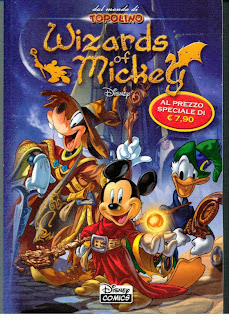 While in Milan on Monday I picked up a huge Italian comic book (575-page long!) called Wizards of Mickey. Since Michael Barrier recently posted on his site some Disney comic panels that -while more acceptable to Europeans than to Americans as they sort of deal with sex - are still definitely in bad taste, I thought I would share an example of a beautiful and really ambitious project. Probably the best stuff that has been released in terms of Disney comics in a while.

Funny that the Italians decided that the book should have an English title. This would never have been authorized in France :-)
Posted by Didier Ghez at 12:38 AM

Wizards of Mickey was a multi-part series that ran in weekly Topolino in Italy last year. This book must be a collection of these 10 original stories. It has also being published across Europe, including France where it was published last year in Mickey Parade as 'Le cycle des magiciens'.

There's an impressive Italian website to support the series at http://www.wizardsofmickey.com/. Here you can download all 10 episodes in PDF format (click on WoM and then Gli episodi).

I beg to differ! "Wizards of Mickey" is easily the *worst* stuff that has been released in terms of Disney comics in a while. Ask any Italian. Of course the art is great, though. Only the art, unfortunately. A big, sad, waste of resources. My advise is to enjoy that and never attempt to actually read it.

Ah! You might be right here! I have just bought it and not read it yet.

Whatever the contents, the cover is unimaginably ugly. Visually unreadable, a mishmash of related colors and "effects" that confuse the eye, and while the individual characters are rendered with some verve, the composition of them is terrible. Just look at Goofy's hand touching Mickey's ear, Mickey's staff touching Goofy's sword, Mickey's hand obscuring Donald's body and hand, part of Mickey's belt seeming part of Goofy's coat, Donald's staff seeming to be part of his right sleeve, Goofy's staff seeming a part of his hat etc etc. The one good thing about this hideous mess is the overall color contrast between background and characters.

Personally I think this new "Ultraheroes" series on Topolino is much better. Gorgeous colors and even Paper Bat (Morcego Vermelho) appears on it!

Where can I see an example of that series Fernando?

On that link is possible even to read the entire story on PDF! O_o

I must say I really like how Disney Italy uses the internet to put these stories online. Very progressive.